Many choir members  are mystified  (misty-eyed) by computers and  modern Digital recording  so Chris Rogers from our bass section has produced the following article to try and keep us all ‘’Up To Date’’ Chris spent 40 years with BT in Product Management and  technical developments of new techniques and has given this very very very simplified and general overview.

A simplified overview of the technology behind digital recording and how we got there and how we can use these techniques for our music and a quick look at Social Media.

If you look back over the past 40 years you will find that you have lived through what is probably the greatest technological explosion in our history. It’s partly linked to the computer but this article isn’t about computers although it helps to have a basic understanding. Why is this relevant to Male Voice Choirs? Well it’s relevant to any music lover.
When Thomas Edison invented the Phonograph in 1877, he found a way of solidifying sound waves into a rotating cylinder with grooves that contained the sound wave information. This was later improved upon and adapted by Emile Berliner in 1887 into the Gramophone by the use of a rotating disc and the record was born; (he also founded the Berliner Gramophone Company, which morphed into ‘Deutche Gramophon’ that many will recognise as a classical record label today.
It was the ability to capture sound as vibrating waves into the groves of a bit of plastic, to be faithfully followed by a pin, which made analogue music recording possible. Later and mainly post WW2 with the advent of electronics, the ability to convert the wiggles of the pin into an electrically modulated signal, which could be amplified, made a large leap forward. But the problem with analogue waves, physical, or electrical is that you can’t propagate them too far before they become weak and unintelligible.
Edison’s contemporary, Alexander Graham Bell took a different track in converting analogue sound into electrical impulses to be conveyed by copper wires. In inventing the telephone in 1876 he hit a similar snag in that electrical impulses wont go more than 3.5 miles even on good copper without amplification and the popularity of the telephone, which used a unique pair of wires per user, meant that the numbers of local users were limited by the copper in the ground. A problem that lasted nearly 100years! 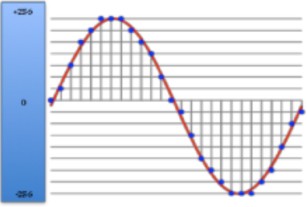 It wasn’t until the advent of the commercially viable computer in the early 1960’s that used digital representation of numbers in the form of an 8-bit byte that the problem began to be solved. A bit has two states is represented as either an ‘on’ or an ‘off’ or ‘1’ and ‘0’ and a byte has 8 of them or 2 to the power of 8 = 256 combinations. To solve the telephone problem of not enough lines, the analogue signal was converted to 1s & 0s by a method called sampling. I.e. an analogue
wave is checked for approximate amplitude (loudness) every few micro-seconds (typically 44,000 times per second) and an appropriate digital value assigned. This allowed several channels (usually 30) of digitised telephone calls to be sent along the same pair of wires. This technique is called ‘Pulse Code Modulation’ or PCM and was introduced into the UK in the early 70s.
The music industry was quick to adopt this technique and the Compact Disc was born (leaving aside the shiny plastic disc / laser technology). The CD or CD quality uses 8-bit PCM and on a computer this is represented as a .WAV file. Great, so we’ve now got the digital equivalent of the Gramophone record! A digital representation of the original but not quite the same, but with a larger dynamic range. Trouble is if you now try and save and store this on a computer you have files in excess of 50Mbits for a 3-minute average tune. Try getting this across your email! And how do you store that much information?

Well, fortunately computers that came onto the home market in the late 70s follow something called ‘Moore’s Law’ which states that processor speeds, or overall processing power for computers will double every two years. And computer memory has been getting larger, faster, cheaper and smaller in the past 10 years. So we have the ability to store large amounts of music data if we wish.
Love it or hate it, the Internet has become pervasive and many of us now do emails and surf the net as a way of life. I’ll not do the history of the internet here, but problems began to occur with trying to store and download or transfer large files such as CD quality WAVs at 50Mbits, especially in the early days of the dial-up connection and modem running at 2400 bit/s! Now we have unlimited broadband and transfer huge files quickly it isn’t as much of a problem but the difficulty had to be overcome by creating much smaller files and preferably under 5Mbits. It was an even bigger problem for the video industry that wanted to move pictures as well as sound. In 1996 the Moving Picture Expert Group came up with a method to compress the audio digital files by much reducing the sample rates to about 1/11 the size of a WAV file at 128kbits This technique is now commonly call MP3 (MPEG layer 3). Movie pictures are similarly compressed using MPEG4. The problem with MP3 is that at the lowest sample rates the quality can be poor despite it taking advantage of weaknesses in human hearing and higher volume can sound ‘scratchy’ so more samples is better and 192kbit/s gives reasonable sound and reasonable file sizes which can easily be emailed. But you can have several choices of rates.
So bringing this technology all together in the back end of the 20thC, we have commercial computers which are fast enough and cheap enough; we have miniturisation and cheap memory storage and we have a way of making small enough files to fit hundreds of tunes in a small space. Thus we have the MP3 Player (e.g. iPod or similar, I Phone, I tunes, etc) so we can now store and transport any music file anywhere in the world. It’s this technology that is making the CD obsolete and it wont be around for much longer!
But just for completeness, back in 1986 musicians also wanted to manage and manipulated digital music files and get creative. They wanted to link up their electronic instruments to the computer to record and store their music and control and play back from the computer. MIDI short for Musical Instrument Digital Interface) is a technical standard that describes a method of digital interface and connectors and allows a wide variety of electronic musical instruments, computers and other related devices to connect and communicate with one another. A single MIDI link can carry up to sixteen channels of information, each of which can be routed to a separate instrument or player.
The beauty of a MIDI file is that each of the instruments is assigned as a voice and can be changed, and the levels of volume of each of the parts can be altered. So in the case of Male Voice Choirs, recording can be made from an Electric Piano in MIDI Format (e.g. using Sibelius) and then manipulated to alter the voice or volume to accentuate each part (Any midi manipulation software, e.g. Sibelius, Cubase etc. I use Anvil). Also voice tracks can be over-dubbed, to put on vocals. Then for convenience, we can reconvert the MIDI file to an MP3 file for easy consumption. So we can now record and store our music in a simple file format on a computer or better still in a ‘Cloud’ on the Internet to make it available to all.

Leaving the Music Technology aside, there has been a recent explosion also in the use of the internet to share personal experience in the form of Social Media. Many of you will already be aware and using such elements as Facebook and Twitter but there are others, and generalized publication media called BLOGs; or to give it its original name a Web-log. A BLOG is a media for sharing more detailed information in the form of articles. Material which would hitherto been shared as for example Newsletters. But the readership of a BLOG can be worldwide once published on the internet and whilst comments on the post can be made, just like a newsletter, its more of a one-directional general interest or diary of events. But unlike newsletters it can be given access by multiple Authors to share a community of interest view. The Choir has a BLOG which has a small following.

Of course if you want to share what you had for lunch and live your personal life with all your friends, via your mobile, tablet or computer, then there is Facebook. This is a closed community (or not) of friends who can quickly share experiences, stories and pictures with selected people or broadcast to anyone who ‘Follows’ the site. It’s become a great business tool for quickly getting shorts bursts of information out to all your on-line friends (or customers) and has largely overtaken the more formal structure of a BLOG. Another is Twitter which only allows you get it off your chest in 140 characters or less (114 chr$) if you include a web link). You can follow the Choir ‘tweets’ on @HonleyMVC via a Twitter account. Linked-In is another Facebook style community mainly for professional / business to aide networking. They all work in a similar way.
So! There you have it; a short potted update on the use of modern computer and social media technology. Don’t think this is a fad. It’s vogue, but here to stay. We’re living through the fastest technology change era of the human race and we would do well to keep up with it.
· Change is the law of life. And those who look only to the past or present are certain to miss the future. John F. Kennedy
· To improve is to change; to be perfect is to change often. Winston Churchill · Progress is impossible without change, and those who cannot change their minds cannot
change anything. George Bernard Shaw