Roger Wild writes: ‘I had been thinking for sometime about how we could create some type of singing group from within the choir as a means of supplementing our established soloists. 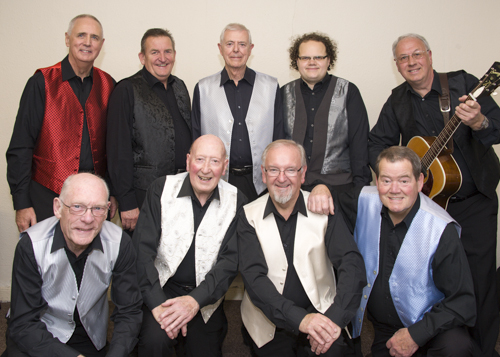 Following Norman’s charity concert held at the Southgate Theatre, Honley in 2012, Norman and I were in conversation about how we could add some different performers to his following year’s concert. This conversation with Norman was the spark that led to what was to become “8 in a Bar”.

I thought that two singers from each section, preferably ones who didn’t normally sing solo, would make a reasonable sound and started asking around to find out who might be interested. In reality I didn’t have to ask too far before I got the original 8. These were First Tenors: Neil Wimpenny and Philip Bowden; Second Tenors: Danny Bullett and John Platt; Baritones: Roger Horner and myself; Bass: Chris Rogers and Edward Wohlman. (I know, Danny is one of our established soloists, but he seemed keen to have a go, so……).

Unfortunately, Neil had to back out before our performance for personal reasons and David Harrison stepped in to take his place – I know the eagle eyed amongst you will notice that Neil is a First Tenor whereas David is a Second Tenor. So what, we are nothing if we aren’t flexible. So there we had it. All we needed now was a name and some music. The name was the easiest. Amongst the many ‘unsuitable’ names suggested was ‘The Testostertones’, but we dropped that because, believe it or not, there was already a group with that name and we didn’t want any future problems when we became famous!! Following a suggestion from Norman we became “8 in a Bar”, appropriate because that’s where we are most comfortable.

One problem associated with having a name which, includes a number (8 in our case) is the covering of absences from the group and in late 2013 Meirion Lewis (First Tenor) joined us. We needed to recognise this and as a result the group has been named either “8 + 1 in a Bar” or “8 in a Bar + 1”, although it has also been suggested that “1 over the 8” might be appropriate. However, David has now, temporarily, left the group, so we are back to the “8”. The music wasn’t as easy, not least because of cost and suitability. Norman had a couple of arrangements which we tried and eventually chose ‘Silver Threads Amongst The Gold’ as it fitted the theme for Norman’s 2013 Charity Concert. This along with pieces from the choir repertoire such as ‘Lily of the Valley’ and ‘The Rose’ created the items for our first performance which, with the help of George on the piano, seemed to go well. It mustn’t have been too bad because we were asked back the following year. In discussion about music we decided that we would like to create a repertoire of pieces that were, largely, different from those sung by the choir and, because of difficulties getting accompanists at rehearsals, wanted items that could be sung without accompaniment (I can’t spell acapella). This also gave me the opportunity to do something I had wanted to do for some time, that being: to arrange some music. So we moved on to ‘I Believe’, ‘Unchained Melody’, and the Everly Brothers items to name a few. The addition of Chris’ guitar has also added variety to our music. So far we have performed at Norman’s Charity concerts in 2013 and 2014 and reached the heights when being asked by Steven to perform at our 2014 Friends Concert and to do a couple of spots at the Meltham Church Bell Appeal concert. Our pinnacle so far must be our performance at the 2014 Lions concert in Huddersfield Town Hall. We have also performed at a charity event at Taylor’s FoodStore in Honley, from which we received a donation of £40, which was paid into choir funds. Watch this space, we await our first recording contract!!! Roger Wild (1/8th of “8 in a Bar”)

This entry was posted on November 10, 2014 by honleymvc. It was filed under Uncategorized .