Concert on The Hill

Ha! Over 60 male voices singing “Dancing Queen!”  Never expected to be a part of that. Unashamedly glad I was though. Much impressed with our bass section who didn’t need the song sheet. Indeed, they looked like they had sung it before. Many times… Pretty sure some of those wags on the baritone back row had substituted “dancing” for “raving.”

A superb afternoon patriotism and song. And midges. There was a wonderful atmosphere during the finale with most if not everybody on their feet.

Lindley junior School did themselves proud with their songs. Their singing of “Rhythm of Life” was one of the highlights of the concert. Well behaved bunch of youngsters too.

No wonder “The Hill” is one of the choir’s most eagerly anticipated concerts.

Good to sing with the lads of Colne Valley MVC. Good to hear them too. Another great choir from our area.

It was pointed out to me by one of the lads who joined the choir on the same night as me  it this concert was just a week or so falling short of landing on our “1st birthday.” Our first year of choir membership. One year and, I think, Severn concerts. We both agreed it’s been time very well spent and in good company.

Next stop our WW1 concert in September. That is shaping up to be a rather spectacular one off of a concert. The Armed Man is a powerful piece o’ work. 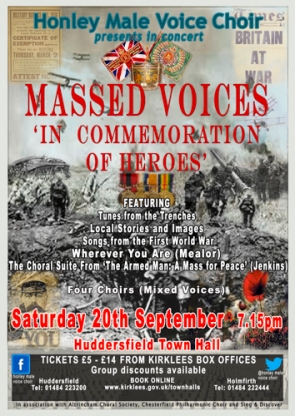 This entry was posted on July 12, 2014 by rouse69. It was filed under Uncategorized and was tagged with concert on the hill, Dancing Queen, Honley Male Voice Choir, Lindley Junior School, Massed Voices in Commemoration of Heroes, The Armed Man.